Absolute best there is! What more can be said, Rick has done more for me then I can Thank him for, a true professional and always willing to go the extra mile to keep you rubber side down and on the trail riding instead of wrenching. Thanks for over a decade helping me with my garage of quads.

Rick is a very straight forward Rick is a very straight forward and honest man. He has answered every one of my questions with great detail. Talking to rick is like talking to an old friend, he’s extremely honest (I know I said that already, but I cant stress that enough, other places will grab ahold of your money and run… – not the case with Rick) and goes over and beyond to give people the best services he possibly can. 5/5 stars, I will be a returning customer. Thank you! Read more “Rick is a very straight forward”

I only wish I had called Rick sooner … 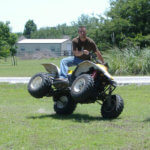 Rick Ritter knows his stuff. I’m not a mechanically inclined guy more than an oil change, tire rotation or brake pad swap on a car. My 2001 Polaris Trailblazer needed some acceleration and a way to stop the chain brakes when I jumped it as well as carb issues with starting reliably. Rick put me a… package together on a chain tensioner spring wheel thing, new upgraded transmission belt, new upgraded clutch parts and springs, high flow air box mod, full exhaust with spark arrestor, and had me send him my carburetor. He walked me through taking it off over the phone. He sent me it back with the kit of other stuff mentioned. He answered the phone and helped me through the clutch parts and carb reinstall gave me the pointers I needed to get everything back on and be sure I didn’t make a mistake. My quad came to life. I was a guy that could “ride the hell out of it” and keep up with faster larger motor quads on the trails before it, but ended up keeping chain master links on hand for jumps because I broke them about every other time it. After Rick’s help, carb mod and kit, I was the dude smoking much faster quads on the trails and never broke a chain again. That order was 2006, never had a problem with any of it. Top speed on that quad was like 52 mph got about 55 mph after, but the 0-top speed went from 3 to 4 seconds to about 1 second after which is what helped me carve up much faster quads on the trail. I fully recommend Rick he’s a good dude took exceptional care of getting me the right stuff and even talking me through the install myself since I lived states away. His price for the full package I got was half what other companies wanted to sell me, but his kit gave me all the usable power I wanted, instant throttle response and gave me the ability to push my quad without breaking the chain all the time from jumping it. I only wish I had called Rick sooner I bought my quads in 2001 brand new and missed years of all that extra fun and reliability I could have had. I had 2 matching quads, i only modified my main that I road and left the one for friends stock. When the carburetor on the unmodified one started acting up but still ran, Rick even let me pay a deposit to get a fixed one in the mail he refunded me when I returned mine after install so that I didn’t have down time on my back up quad. Really good customer service, the guy lives this stuff like we do. I know it’s been years, but wanted to give a testimonial because people need to hear it. Thanks again Rick     Read more “I only wish I had called Rick sooner …” Couldn’t have done it without Rick and his parts! Great products and outstanding customer service. I messaged him once on a Saturday evening with a question and got a reply to call him, I don’t think he takes a day off! My son’s 2000 trailblazer with RR oil pump block off kit and cable, pipe… kit, chain and sprockets, carb jets, hood, exhaust shield. Read more “Great products and services!” 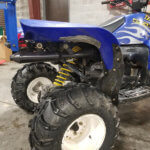 Read so many good things about Mr. Ritter and his exhaust kit for the Polaris trailblazer 250. I sent him a friend request late one nite and he called me and we talked about the kit. This man knows his stuff and it was like I was talking to a friend. I ordered the kit… a few days later. Shipping was super fast the directions were easy to understand. What a change it made to the quad!!! Woke this thing up a bunch! Thank you Mr. Ritter for taking you time to talk to me answer all of my questions and for an amazing kit for my quad.         Read more “Customer service still exists.”

People are always surprised at how fast and powerful it is! 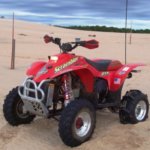 Won a lot of Open Am races on this thing. Rick is top-notch for sure

RCR has been real good to us we always the fastest Polaris drag bikes out of anyone. Rick is top-notch for sure.

Really hyped it up!

Thank you for all the help!

I don’t think I have pictures of all the four wheelers, motorcycles and snowmobiles that you have helped me with through the years. Thank you for all the help and good times hanging around the shop, much appreciated man!!

The oil block off was a great investment. 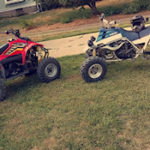 The oil block off was a great investment on the trailblazer I’ll be ordering one of your pipes for it next.

Brought back to life with help from RCR. My fleet (1994 sportsman is absent from photo). All of these were purchased not running and were brought back to life with help from Ritter cycle racing. If it wasn’t for Ritter cycle these would likely be in a scrapyard somewhere. Thanks Rick Ritter!! Here is a picture of the ‘83 gold wing you helped me get going! It was ridden from Illinois to Maryland then turned around made it all the way to Oregon! Thanks Rick!

Love it when someone asks if I know any good quad mechanics. I always say “No I don’t know any good ones but I know an great one, Rick Ritter at Ritter Cycle Racing.” And then they ask “Is he expensive?” And I say ” I don’t know, I just know it’s done right, I… don’t want to pay twice. First time if someone else does it wrong and then pay him to fix it the right way.” Read more “I just know it’s done right.”